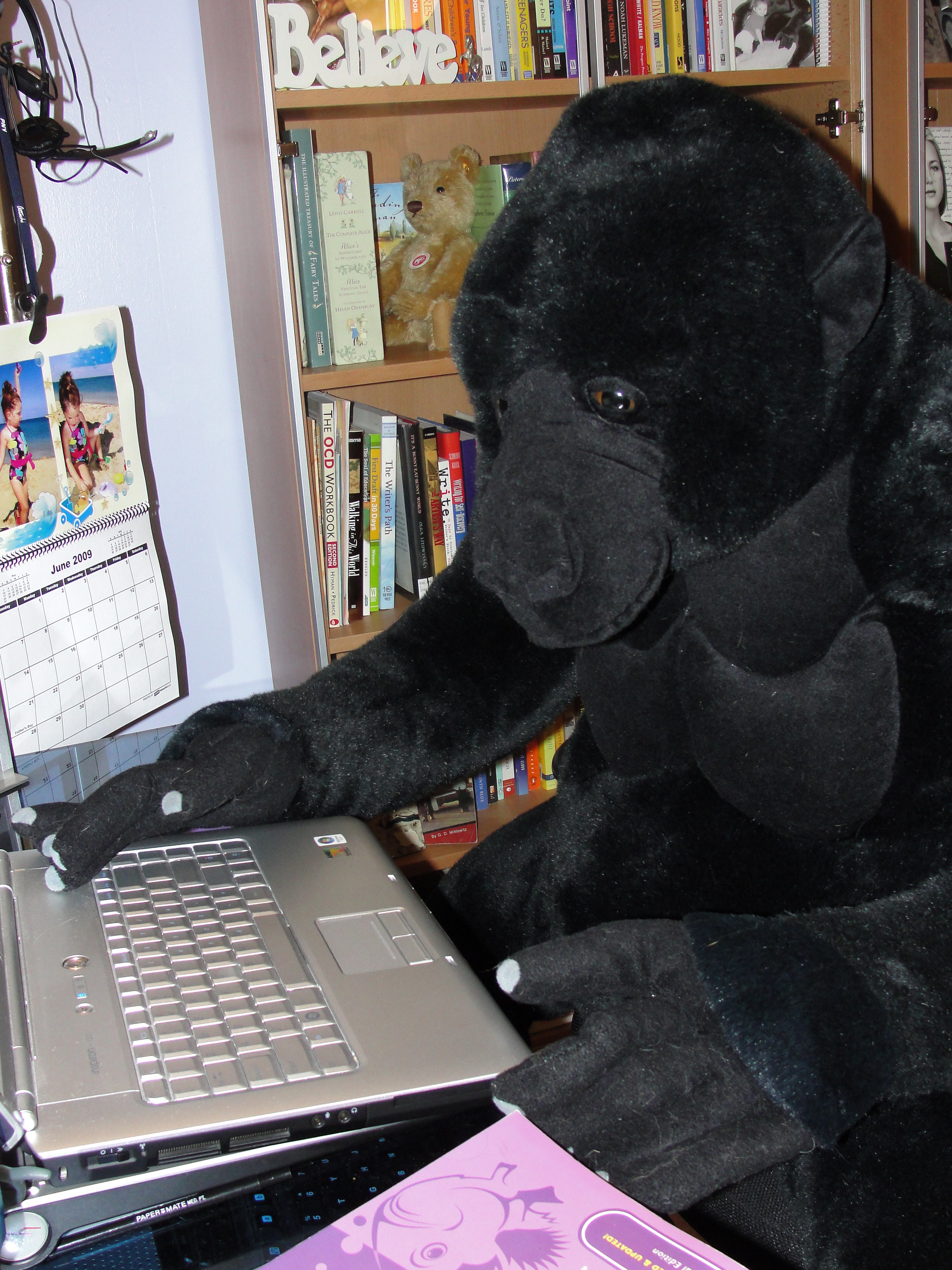 For years, Norman the gorilla sat in front of the toy store. He posed with customers, listened to children tell stories, and he even let crying babies sit in his lap.

But  then Norman began to wonder. Was there more to the world besides sitting on a bench, day after day after day?

So he asked to visit my house, where  he sat in our swing, climbed the Japanese maple tree, and then announced, “I’m going to publish a book. If you need me, I’ll be in your writing room.”

“You have to go back to work tomorrow,” I said. 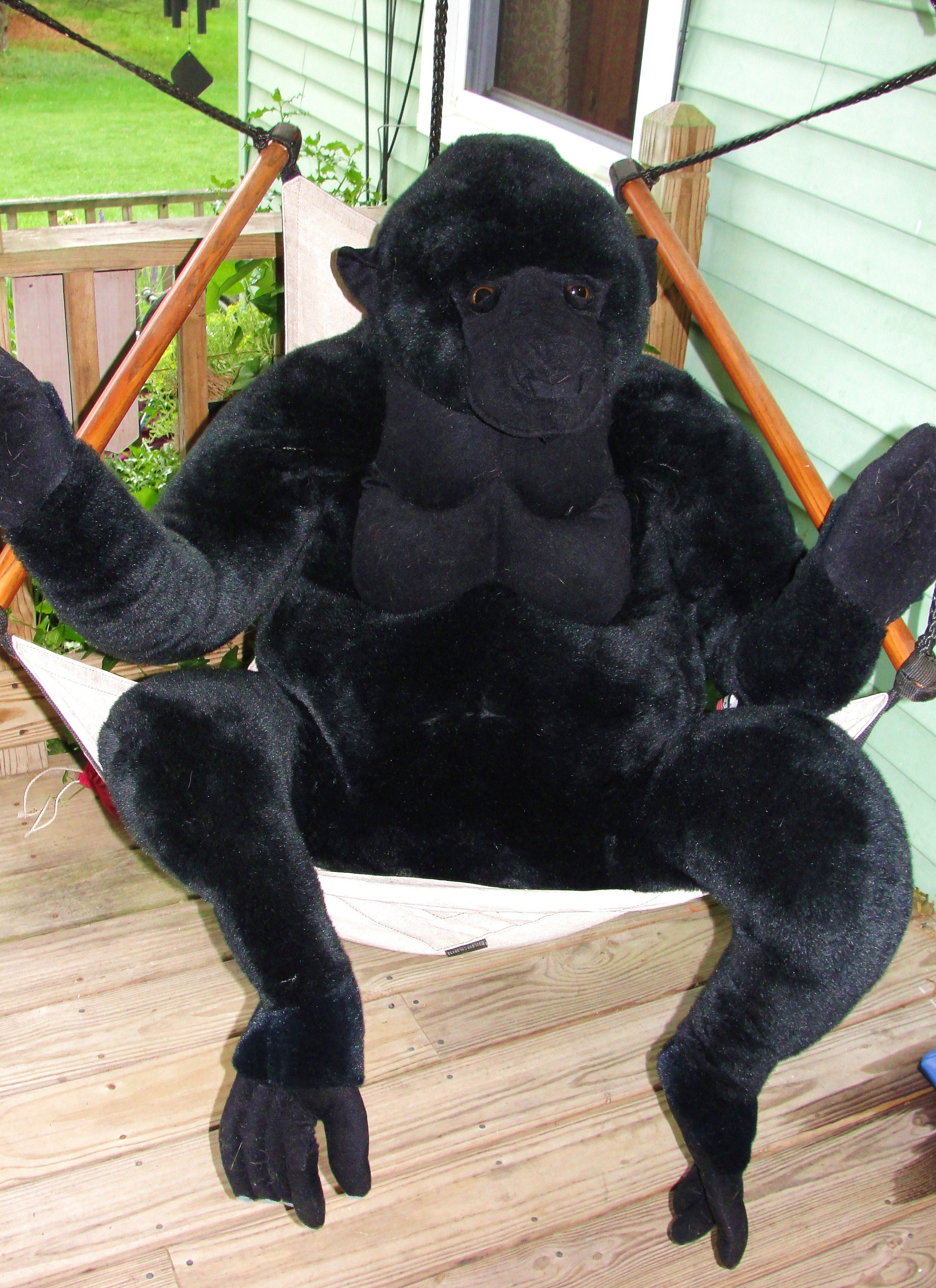 “I don’t think so,” said Norman. “I’ve decided to write my autobiography. It could take me years to find an agent.”

“Years? Agent? Then who will sit on the bench?”

“Ask the giraffe,” said Norman, who when asked to reconsider, said, “My swinging days have only just begun.”

Norman, it seemed, had a new life. 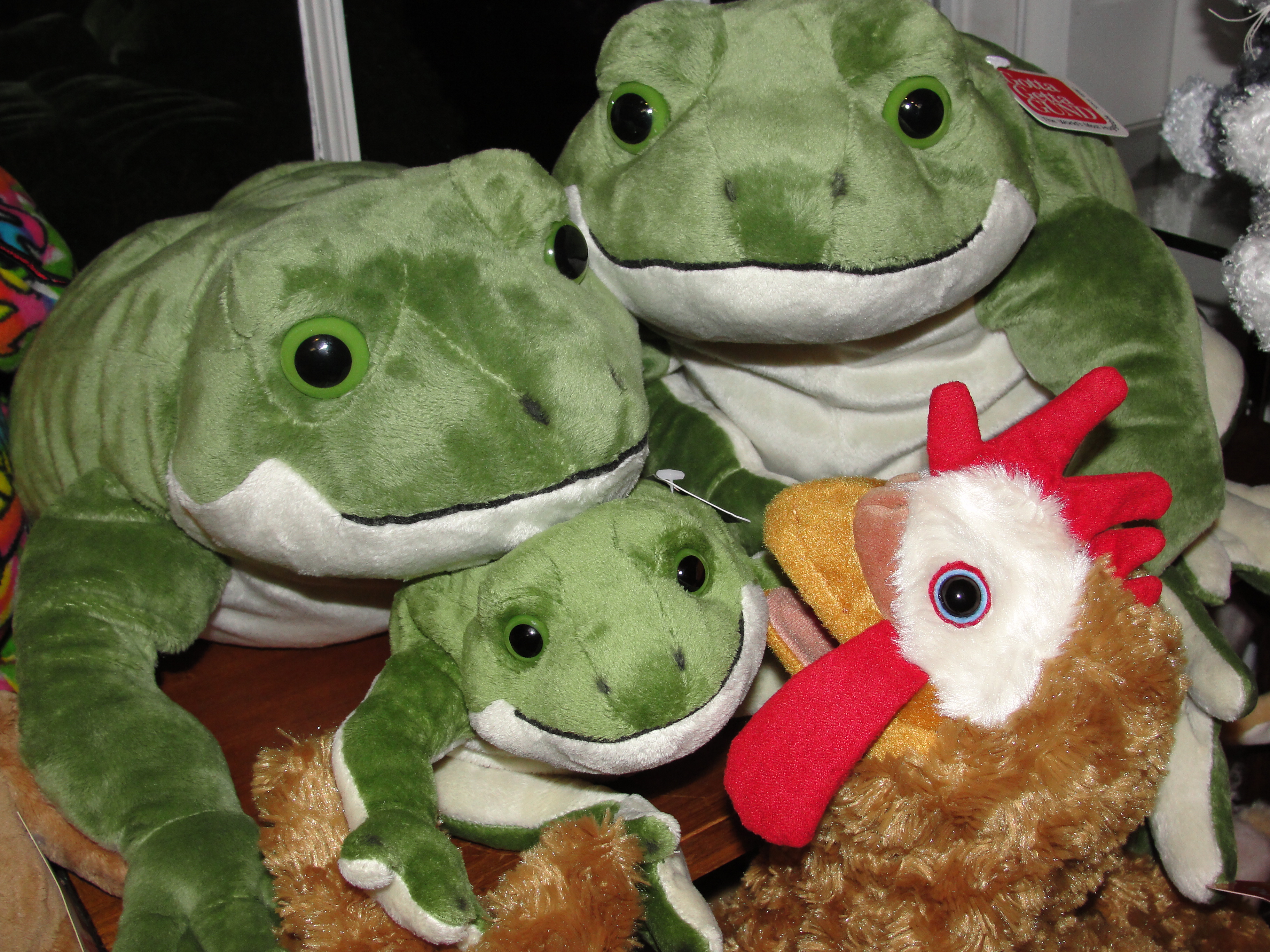 The bench empty, Gerdie the loves-to-gossip chicken spread rumors around the store. Soon, all the animals wanted to audition for the job. The giraffe was too tall; his head bumped the porch ceiling. The rhinoceros was too long; his bum exceeded the width of the wooden bench, three times over. The monkey was too unpredictable; he swung from the rafters and surprised customers by jumping on their heads.

Something had to be done.

We tried dogs. Big stuffed dogs. Small stuffed dogs. Even real dogs. They barked too much. And then there was the goat, but that story is for another day.

In utter desperation, we called a meeting of the village ducks. Might they take turns sitting on the bench? Even with the incentive of extra duck food, the ducks declined the offer.

What was the toy store to do? 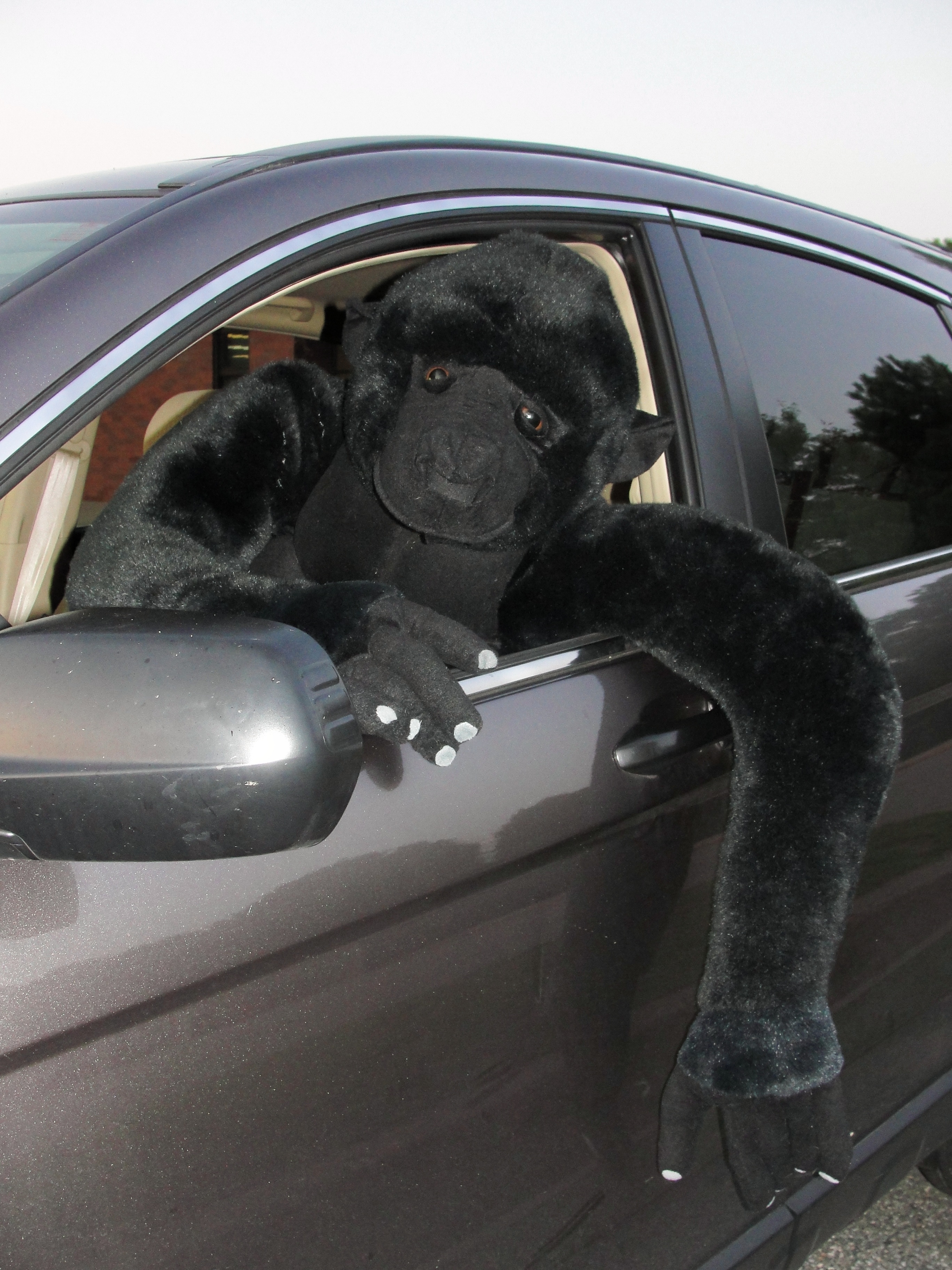 Then one day a large box arrived. It had to be opened outside; it did not fit through the door. What was in the box? A parade of waddling ducks  stopped to see what was happening. “Quack,” said one.

Finally, the sides of the box split open, and out fell Big Bear.

“Was Norman this big?” someone asked.

None of us could remember, so Norman agreed to set his writing aside for the afternoon, and drove to the store so we could compare the two.

Norman sat on the bench.

Bear tried to sit on the bench, but his Big Bear bum tipped him over. 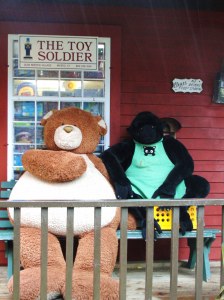 Months went by. Years, even. Bear greeted people. He posed for pictures. And then he began to get dirty from being loved so much. Children shared their ice cream, cotton candy, and fried dough coated with powdered sugar. “A bear that big needs a lot of food,” said a kid with his plate at Big Bear’s mouth.

After a DO NOT FEED BIG BEAR sign was put outside, kids jumped on him instead.

“I didn’t sign up for jumping,” said Big Bear after he asked for an early-retirement package and announced he planned to move in with with Norman.

“There’s no room for you at my house,” I said, helping Big Bear back onto his bench. “I’ll ask people to be more gentle.”

And it worked for a while, until a child insisted that Big Bear had asked to finish his chocolate ice cream with sprinkles.

It was time for Bear to have a  much-needed bath.

The next day it rained and rained. I came ready with a bucket, a scrub brush, and a hair dryer.

First, I showed Bear a yoga pose. (His feet were the dirtiest, and this was the only way for me to clean them.) Bear rolled over on his head. “Good Bear,” I told him. “Now stay like that while I fill your bucket.”

At the sink, I mixed soap with hot water. I carried the bucket back to Bear. 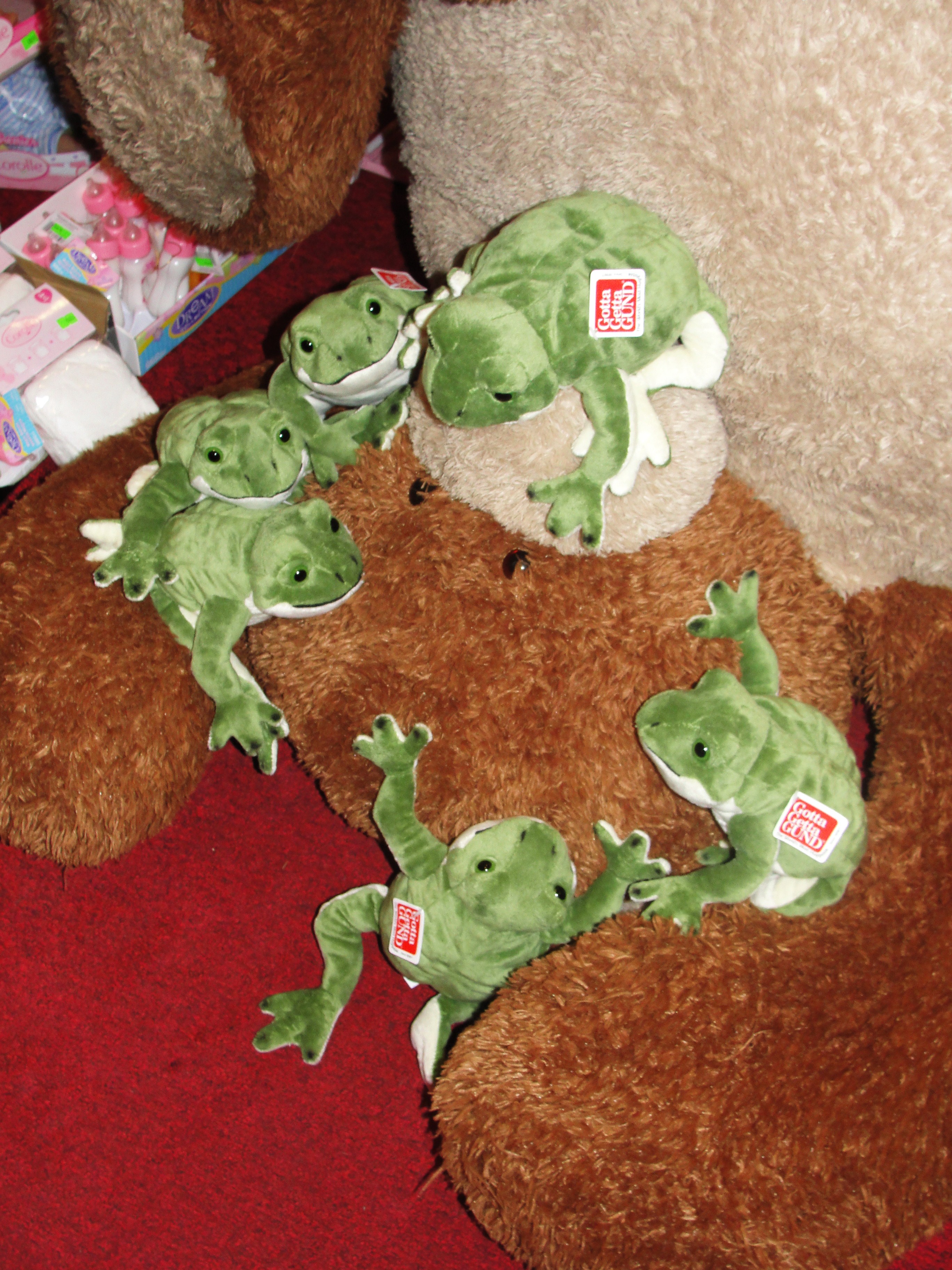 Bear was no longer alone. Bossy Frog’s babies, who are very, very curious about all that goes on in the store, had wandered over (or rather leaped) to see what I was doing. They stared at Bear. Why was he not on his bench? Why was he upside down? Did he want to join them in a game?

Bear stared back. Why were Bossy Baby Frogs sitting on his head?

After promising the frogs they could help, I began to scrub and scrub and scrub. Bear was patient as could be. Baby Bossy Frogs were not as patient. Besides being very, very curious about all activities in the store, they are also very, very chatty. “When was I going to be done?” asked one. “What do we get to do?” asked another.  “I want to be in charge,” said the most bossy in the bunch of bossy baby frogs.

“Try standing on your head, like Bear,” I told them. So they did. For a long, long time. As long as bossy baby frogs can stand on their heads.

“Are we done?” asked a frog. “Yes, my head hurts,” said another. “When can I be in charge?” asked the baby frog much bossier than the rest.

“Yes, Bear, you are almost done. And now, Bossy Frogs, it is time for you to help.”

“Hooray!” said one. “Me first!” said another. “I’m in charge!” said the bossiest of the bunch.

Big Bear waited patiently while the bossy baby frogs argued over who would do what. Finally, they came to an agreement. 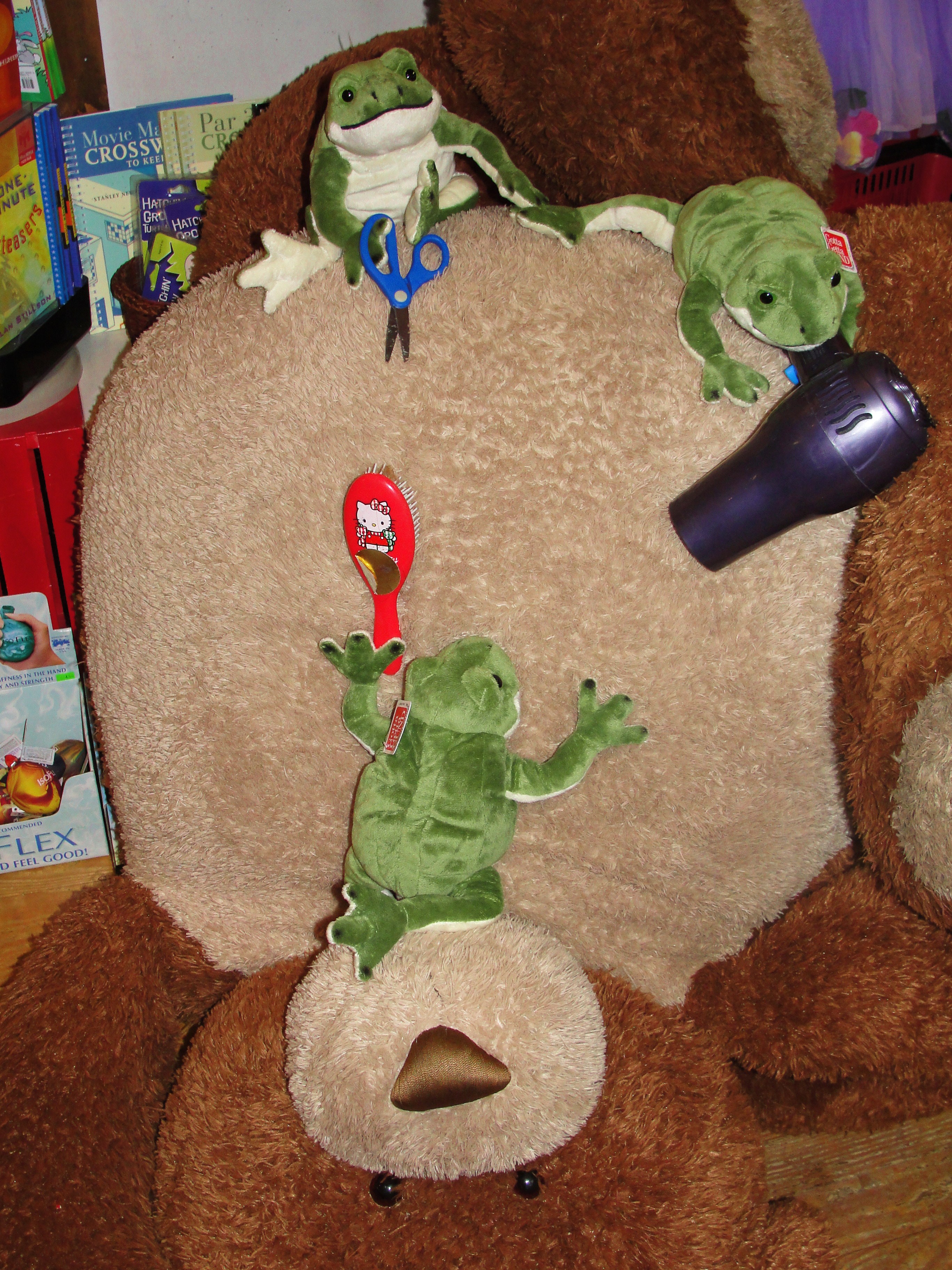 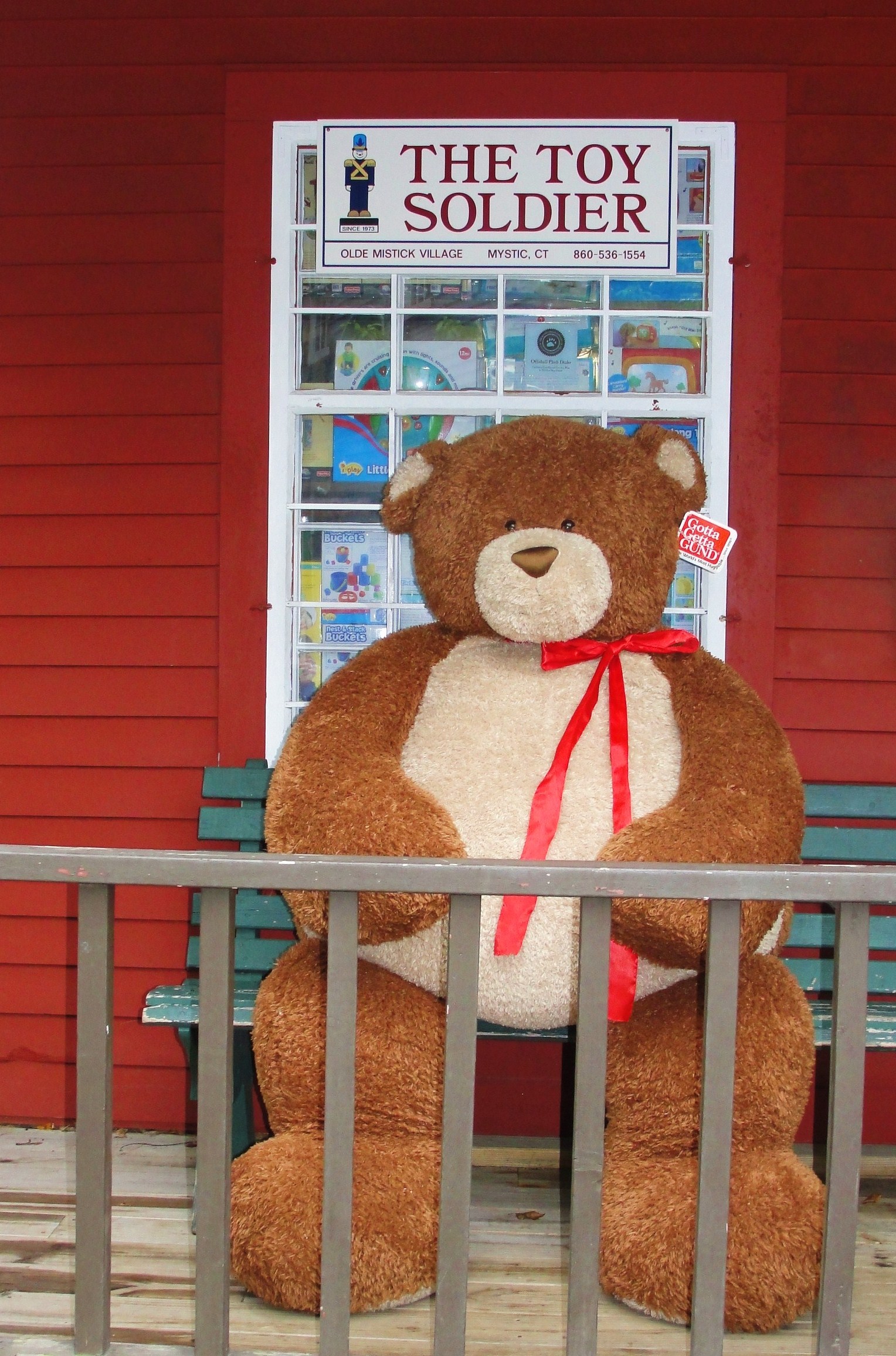 And by the end of a very long day, Big Bear was finally clean and dry, ready to return to work in the morning.

If you are in the Mystic area, stop by and say hello. Big Bear loves to give hugs, as long as you don’t offer him any food, or run into him at high speeds, thinking he’s a trampoline.