THE HIPPO YEARS by Diana Murray

We had no idea what a fateful day it was when my husband (long before we were married) went to a health insurance expo in Manhattan. He came home with some free swag, including a hippo puppet from HIP insurance. Of course we had to try it on and take turns doing voices–because we’re silly like that. After some impromptu puppet antics, we stuffed the hippo in a drawer and forgot about it. Many months later, I was cleaning up and wondered if I should put the hippo puppet in the “giveaway” pile. But then I thought, who knows, maybe we’ll have kids one day and they can play with it. I’ll take any excuse to save stuff!

Fast forward a few years and we got married and had our first child. As she got older, Hippo never failed to make her laugh. He was the audience for her living room ballet performances, he tucked her in at night, and he helped her get through potty training by telling hilarious jokes and doing slapstick routines. “Do hippo!” my daughter would say. “Doing hippo” was her ultimate reward–better than lollipops and ice cream. Hippo was the funniest, silliest, best-est member of the family. We never left home without him. Sometimes it was tiring. As an adult, it’s tough to tap into your imagination like that all the time. “We can’t say no,” I used to tell my husband. “Because you know…pretty soon she’ll stop asking.” *sad face*

When baby #2 came along, Hippo was quick to welcome her, too. To familiarize her with all our inside jokes. We used him so often we had to recolor his pupils with black marker and cut off loose threads.

Hippo’s days were numbered…but not because of wear and tear. As time passed, living room ballet routines became less frequent. The line between fantasy and reality became less fuzzy. And offers by Mom and Dad to “do Hippo” were increasingly met with eye rolls. Poor Hippo.

Still, we will always remember the magic of the “Hippo years”. He’s even been immortalized in this drawing by Salina Yoon (something I won when she was promoting her book, FOUND, about a lost lovey).

My daughters no longer play with Hippo, but I asked if they’d mind me getting rid of him, just to see what they would say. They were outraged. “Are you kidding?” they said, “It’s Hippo!”

Diana Murray grew up in New York City and still lives nearby with her husband, two daughters, and a spiky bearded dragon who loves listening to stories–especially about dinosaurs. Some of Diana’s other picture books include GRIMELDA: THE VERY MESSY WITCH, NED THE KNITTING PIRATE, CITY SHAPES, and many more. Her poems have appeared in magazines including Highlights, High Five, and Spider. For more information or to download free activities and coloring pages, visit http://www.dianamurray.com

Here is a trailer for Diana’s most recent release (January, 2017), GROGGLE’S MONSTER VALENTINE, which was featured as a recommended title in the Washington Post.

Thank you, Diana, for sharing your lovey story! I’m so glad to know that Hippo has a loving forever home. Congratulations on all your wonderful picture books in the wild!

For anyone interested in contributing to the #WhosYourLovey blog series, inspired by my picture book LUCY’S LOVEY, please be in touch. Contact me here for detailed information on what is needed to be a guest blogger.

With my fiftieth birthday around the corner, not to mention the highly anticipated arrival of my AARP membership card, I must confess that my childhood lovey memories have faded a bit. I couldn’t tell you any of their names, but what I do remember is that my twin sister and I each had a little lamby and some very special Madame Alexander dolls that were a gift from my Aunt Peggy. 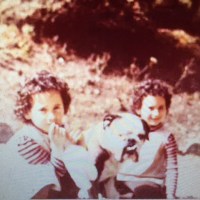 My sister and I happened to discover the Madame Alexander dolls right before the Christmas holiday (circa 1973) while we were on a top-secret mission to find our gifts. With the help of special agent Dickens, our English Bulldog, we found the dolls tucked away in boxes under a bed. (Note to adults: If your children are skilled detectives, the bed is a terrible hiding place.)

One of the dolls had a gorgeous burgundy skirt, white pinafore with matching bonnet, petticoat, bloomers, and black Mary Jane shoes. The doll also had beautiful long dark brown hair—well, not for long!

Like the rest of my cherished dolls, this doll went through a rigorous Newman care program. Hair styling and gown redesign were a must. Nothing short of black magic occurred than when I learned how to use scissors, markers and makeup. (My sister and I also had a gift for melting crayons on the radiators, but that’s a whole other story.) Needless to say, this doll was no longer that perfect little doll I found under the bed, but there was no doubt about it—she was my perfect little doll.

About Robin Newman
Raised in New York and Paris, Robin was a practicing attorney and legal editor, but she now prefers to write about witches, mice, pigs and peacocks. She’s the author of The Case of the Missing Carrot Cake, A Wilcox & Griswold Mystery (Creston Books) and Hildie Bitterpickles Needs Her Sleep (Creston Books). The second book in the Wilcox & Griswold mystery series, The Case of the Poached Egg (Creston Books), releases April 2017 (but is already available for pre-order at your favorite independent bookstore, Amazon and Barnes & Noble) and No Peacocks! (Sky Pony Press), flies onto bookshelves fall 2017. Robin lives in New York with her husband, son, goldfish, and two spoiled English Cocker Spaniels.

You can connect with Robin here:

Thank you, Robin, for sharing your childhood lovey story with us! I must add that I, too, had beloved Madame Alexander dolls as a child. My favorite was Little Bo Peep, which I was given the day I turned six. That year, for my birthday party, guests came dressed as famous nursery rhyme characters. I, of course, dressed as Little Bo Peep.

A Magical Lovey by C. C. Payne An older lady in the church choir had given my mother the yellow teddy bear near the end of her pregnancy. So “Baby Bear,” as we came to call him, occupied my crib even before I did. Once I was placed in the crib too, Baby Bear and I were fast friends.

Baby Bear’s appearance was unremarkable. He looked neither happy nor sad with his round, plastic black eyes. His fur wasn’t especially soft and he wasn’t especially huggable. BUT! Baby Bear held a magical secret: There was a music box in his belly, which played Brahms Lullaby! My mother wound the key on Baby Bear’s backside nightly, after placing me in the crib. As a result, I was never alone in the dark—or anywhere else—I dragged Baby Bear everywhere, I’m told.

When my parents divorced, however, Baby Bear was packed up, not to be seen again…for twenty years. My daughter, Laurel Grace, was two years old when my mother found Baby Bear and brought him to our house as a gift for Laurel. I bit my lip nervously as my mother presented her gift—by then, Baby Bear was missing one eye; his red felt tongue had come halfway unglued at the top and hung pitifully; his fur was faded, patchy and thread-bare in places. Even so, my mother wound the key on his bottom and Brahms Lullabye played as she handed the bear to Laurel.

I waited for Laurel to crinkle her nose at what had to be the ugliest stuffed animal she had ever laid eyes on. But instead, Laurel clutched Baby Bear to her chest as if he was the most beautiful thing she had ever seen. To my shock and amazement, Baby Bear was instantly Laurel Grace’s favorite lovey, too.

Perhaps J. K. Rowling sums it up best: “Ah, music,” he said, wiping his eyes. “A magic beyond all we do here!” (Harry Potter and the Sorcerer’s Stone) Yes, music is magic. Music bypasses the brain and reaches straight into the heart. It overcomes ugliness with its beauty. Music fills darkness and silence with light and song. Music assures us that we aren’t alone—in the world, in the dark, in our feelings. And Baby Bear did all of that.

Years later, unfortunately, a hotel maid missed Baby Bear’s magic and threw him away as she straightened our room one morning. I understood—by then, he definitely looked like he belonged in the trash. There were a lot of tears over Baby Bear and, of course, I tried desperately to get him back. Even after our vacation, I was still trying. My letters ultimately reached the owner of the hotel, who responded with a handwritten two page letter about his own lost lovey, conveying empathy and compassion, and offering his sincerest apologies—yes, even hotel moguls have loveys!

Although we don’t have Baby Bear anymore, we’ll always have Brahms Lullabye, the song that remembers a plain yellow teddy bear who comforted and kept us in the dark.

C. C. Payneis the hopeful, humorous, distinctly Southern middle grade author ofThe Thing About Leftovers; Lula Bell on Geekdom, Freakdom & the Challenges of Bad Hair, and Something to Sing About. She says, “Problems and fears can grow to monstrous proportions when left alone in the dark–I know from experience. Writing is my attempt to bring problems and fears out into the light, cutting them down to size–and sometimes, even laying them to rest. So far, I’ve written about fear, faith, friendship, bullying, death, divorce and blended families.” To learn more, visit www.ccpayne.net

Thank you, C. C. Payne, for sharing your childhood lovey story, as well as your heartfelt novels with the world.