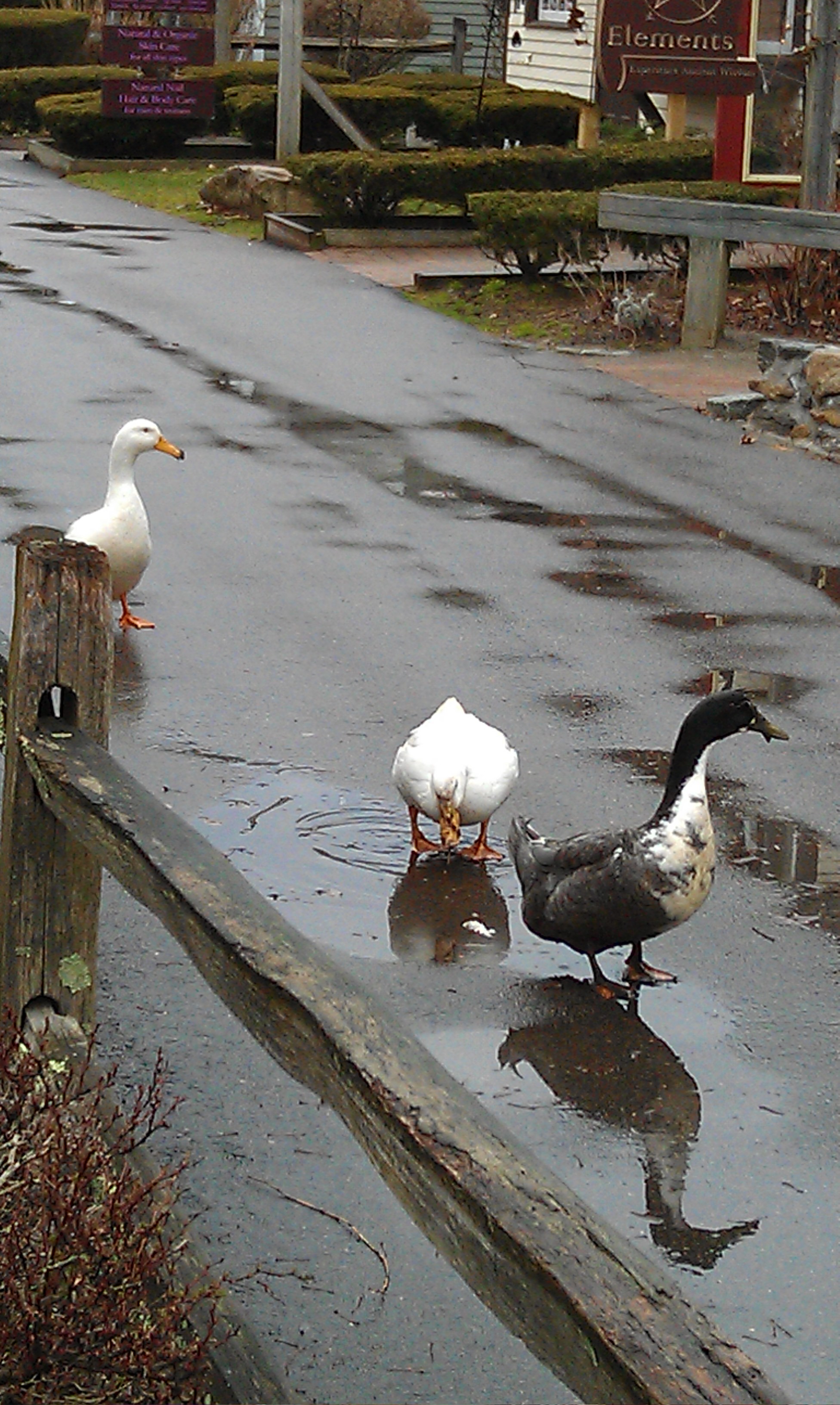 This month, the ducks of Olde Mistick Village have come out in full force. Unannounced as usual, the annual visitors have returned to the large pond with the intention of staying until Labor Day. Our permanent resident ducks now count for one-fifth of the current duck population. The mating has begun.

Ducks waddle up and down the sidewalk, usually in pairs, or groups of three.  They chase one another–in the large pond, through the grass, and anywhere else their webbed feet will take them. The fences that line the storefronts are no challenge; they dart under or fly over. In a sense, the ducks rule the road. But like children, they can get out of hand, and this is where I come in.

Now is the time of year when my job at The Toy Soldier takes on another responsibility. Aggressive ducks, especially male ducks being overtly ruthless with females, require duck interventions. With the aid of a rolled-up newspaper, I create loud noises to disrupt their behavior. Most times, it works.

There are those moments during mating season when visiting children witness the male ducks biting the necks of the females. It disturbs the majority because they think the ducks are hurting each other. Unfortunately, sometimes this does happen. Last year, we lost two females to over-aggressive visiting males. 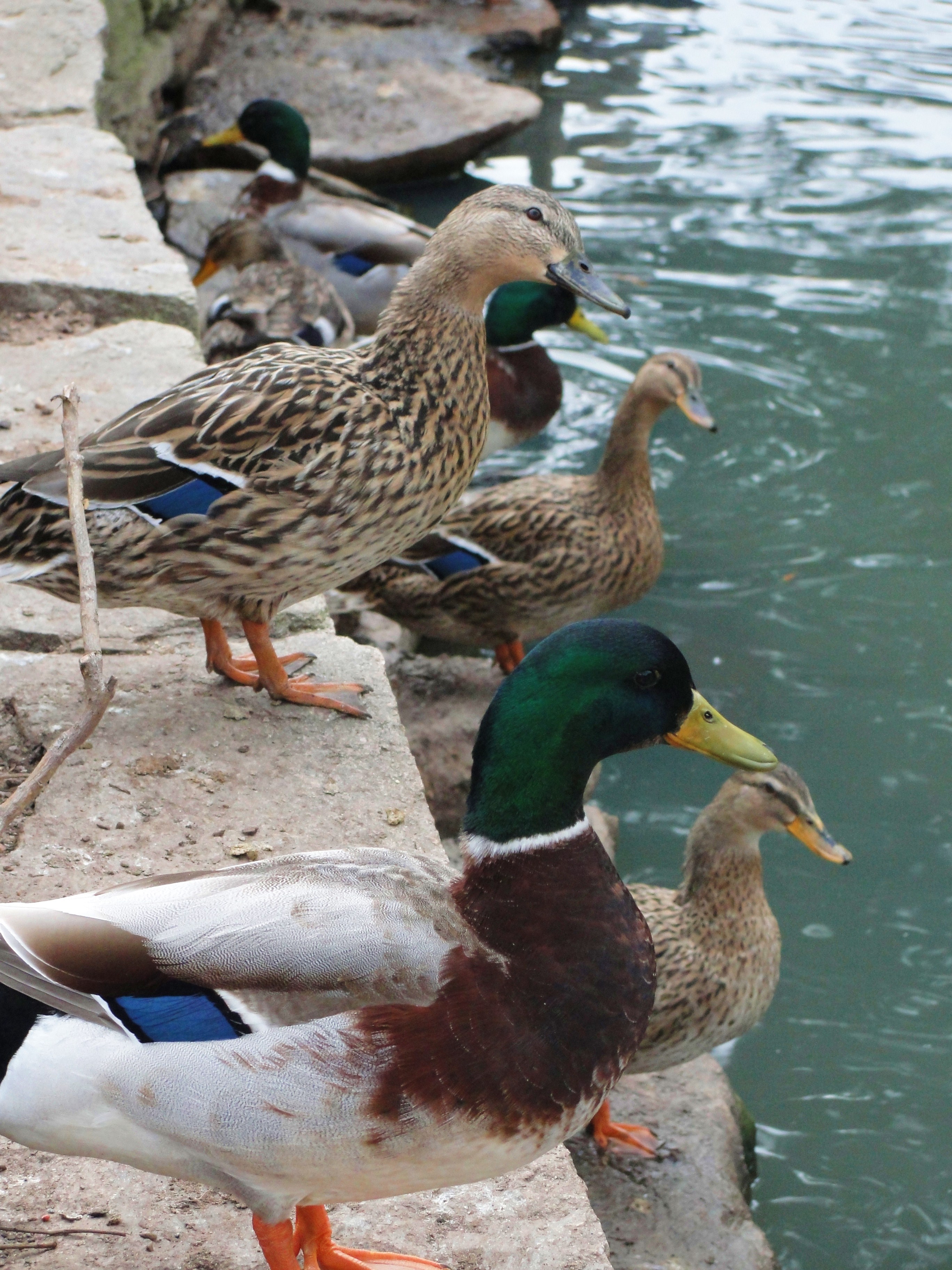 This is a part of nature, as I’ve tried to explain to my five-year-old granddaughter. She is now well aware of why the seagulls hover near the ponds. They watch for unattended baby ducklings, yet to be born this year at the village. Soon, this year’s babies will begin to make their appearances. That is, if the neighboring skunks and raccoons don’t disrupt the eggs. I try not to think about this too much.

With the odds against the babies growing full-term, only time will tell if we will be graced with families of ducks entertaining and delighting visitors of all ages. I can only hope so, but until then, the adult mallards and other ducks, including one lone goose, put on their own performances. Especially when it rains. 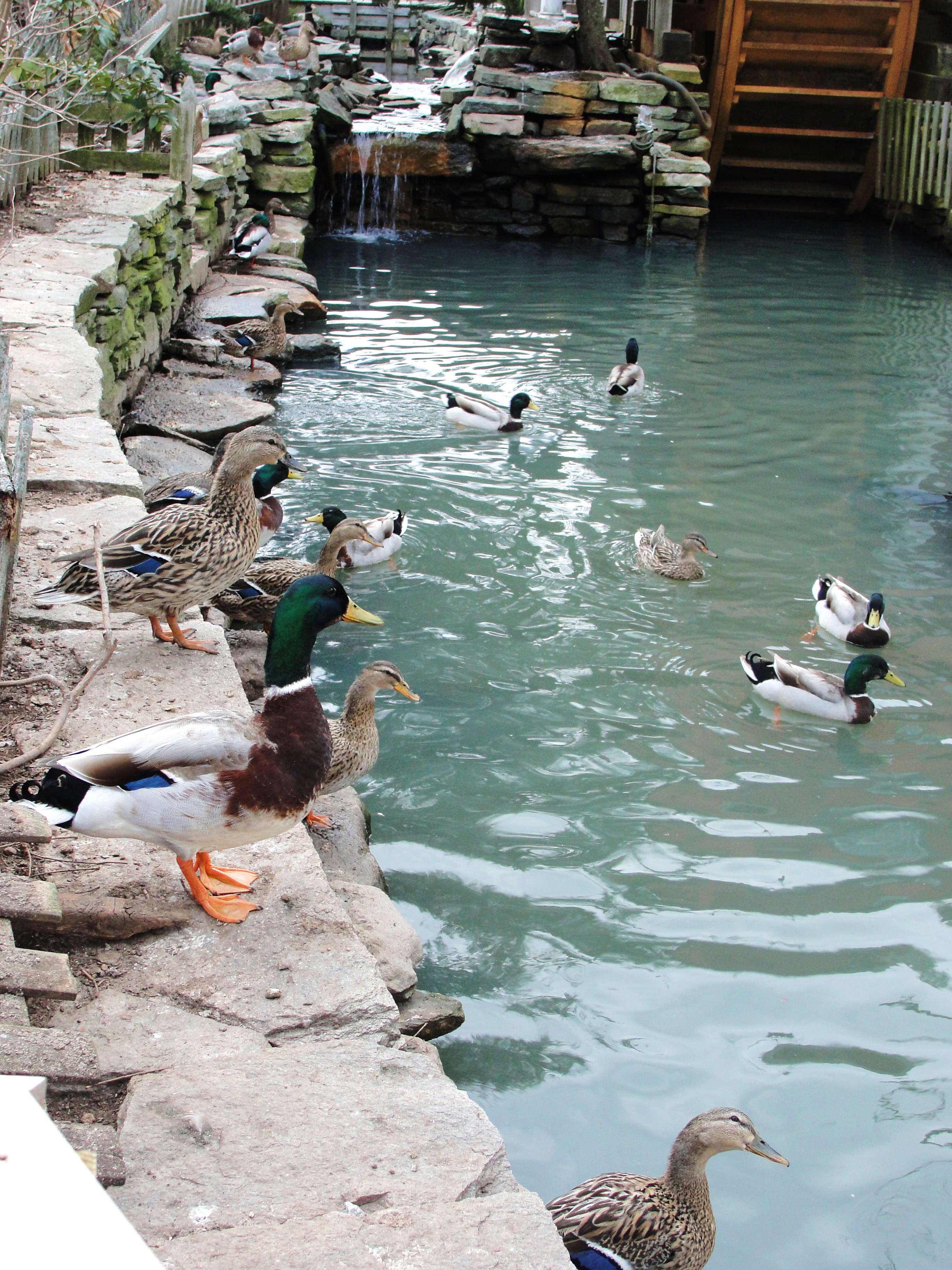 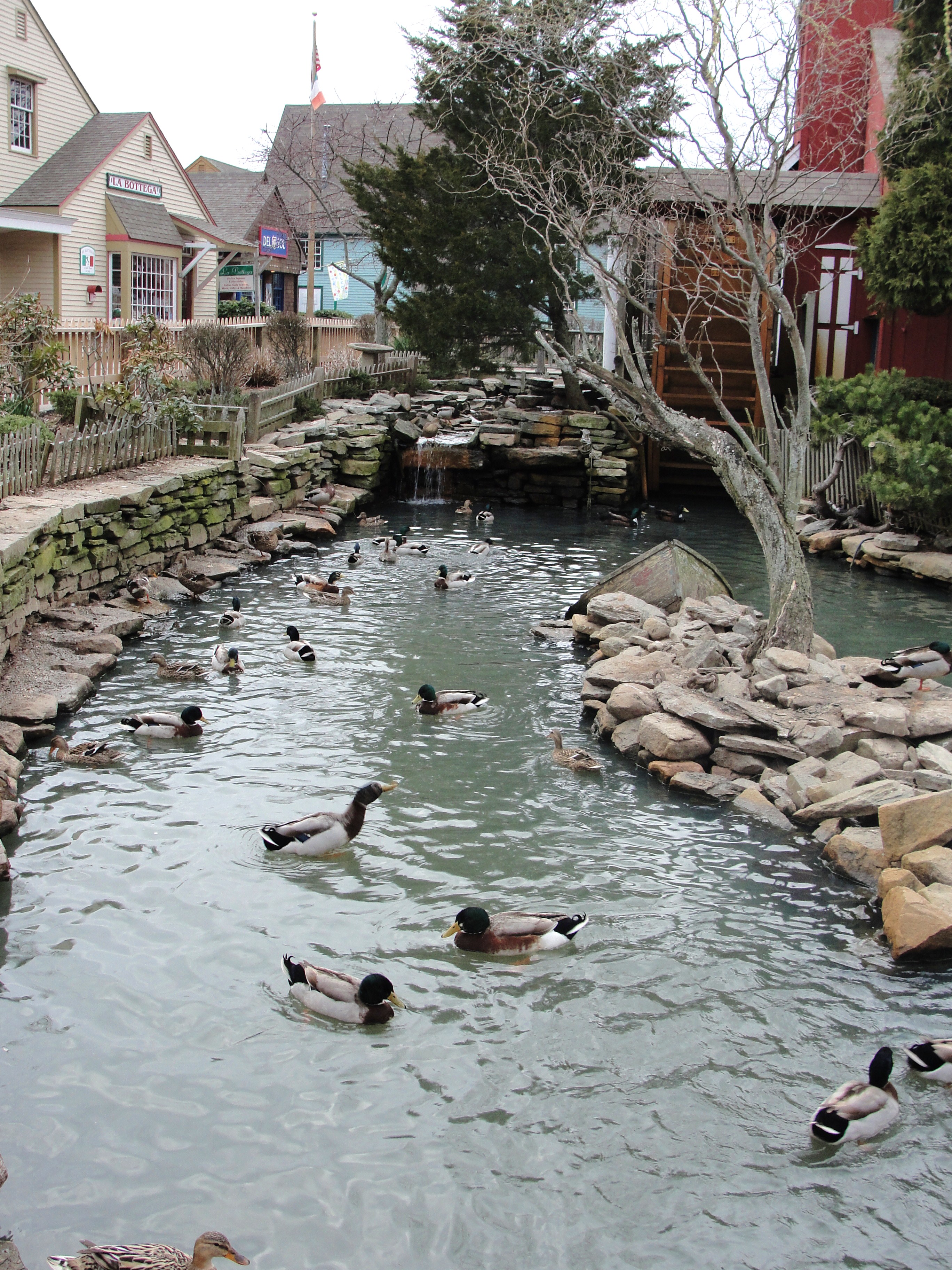 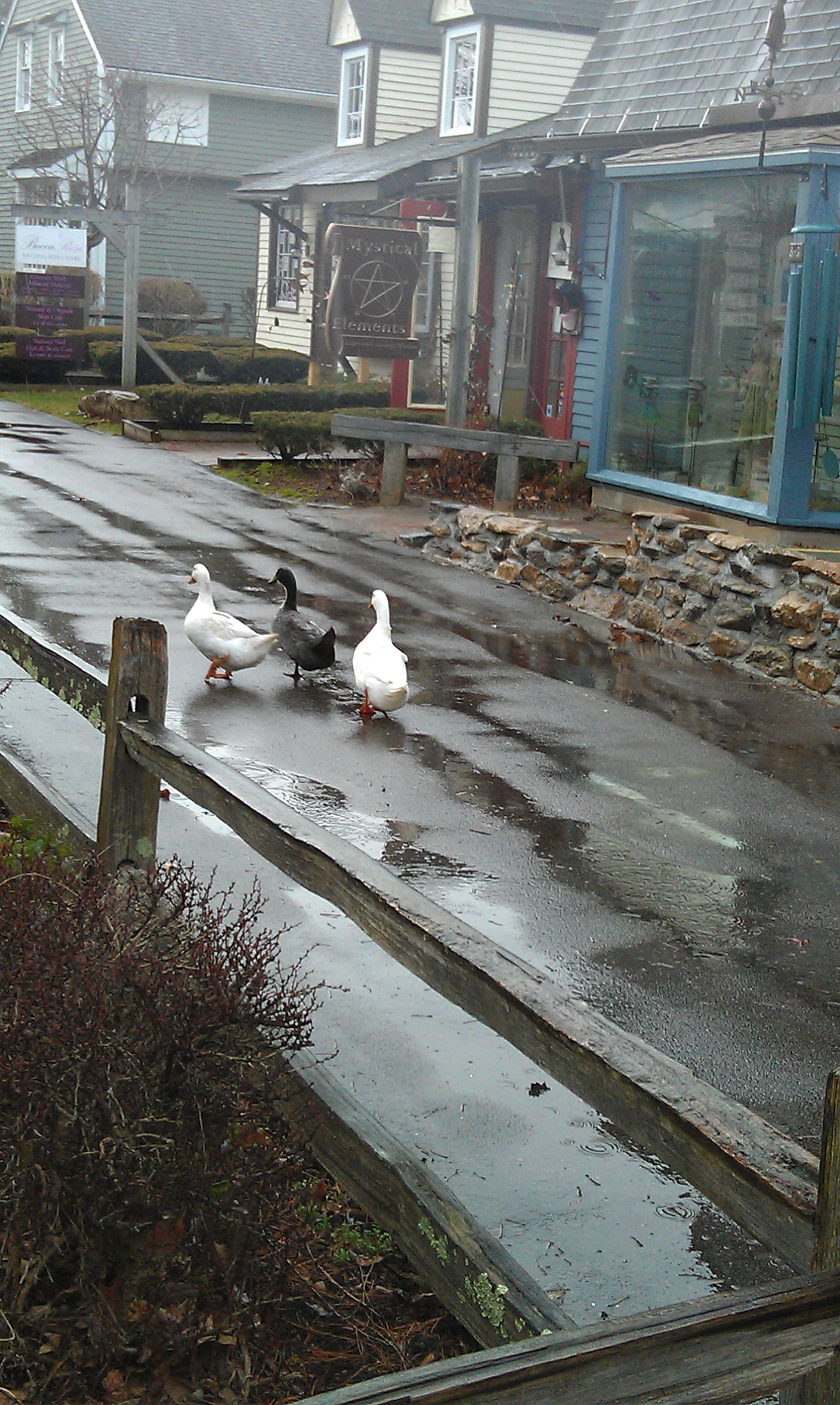 Last Tuesday, it rained and rained and rained. I dusted, checked in new merchandise, redid a few displays, and lined up the stuffed animals. Every now and then, I glanced out the window to check for any brave shoppers who had come prepared with large umbrellas. And reliable rain boots.

No umbrellas. No children wearing colorful boots resembling ladybugs or frogs or puppy dogs or ducks. Only real ducks. More specifically, the gang of three who rule our end of the village. 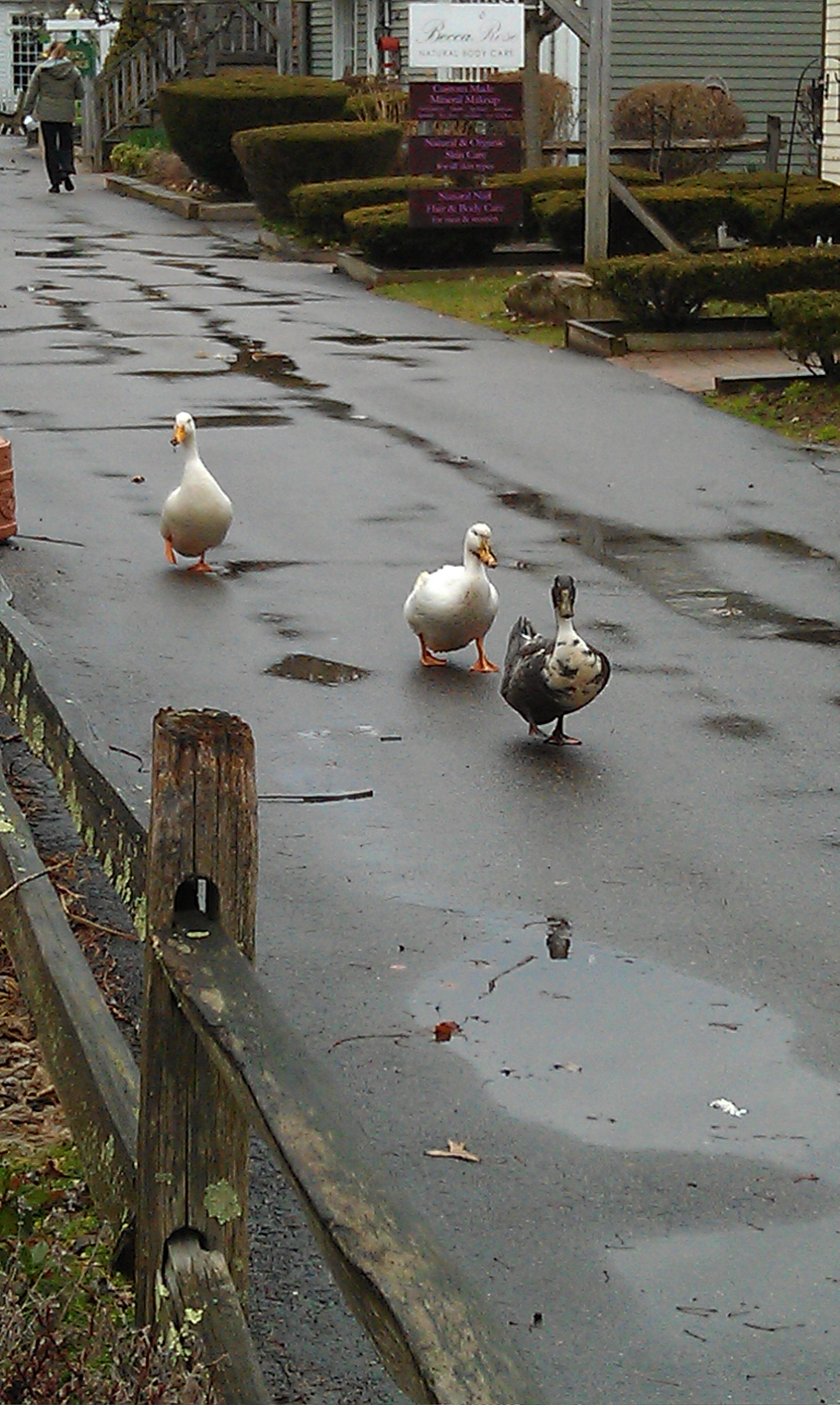 No. The ducks were not interested in our newest arrivals: puppets, books, science kits, and habitats for bugs. When their leader, the darker duck, headed up our walkway and quacked at me for food, I apologized for being out of duck nuggets. I assured him that I did not eat the leftover nuggets for lunch, even though I was starving and had forgotten to pack food for the day. (The last of our duck food had been given to a child who wanted to feed the ducks, and didn’t have a dollar.) 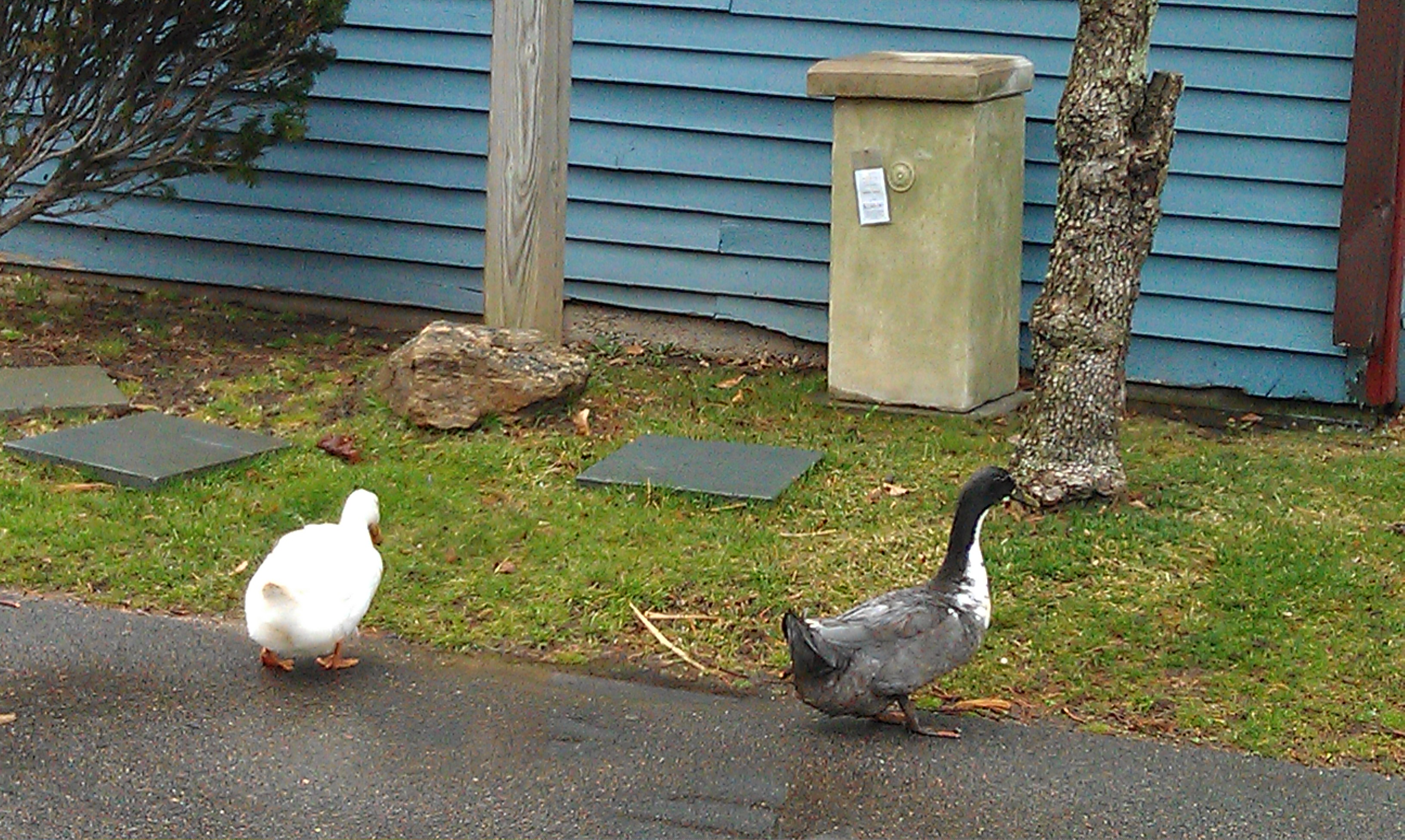 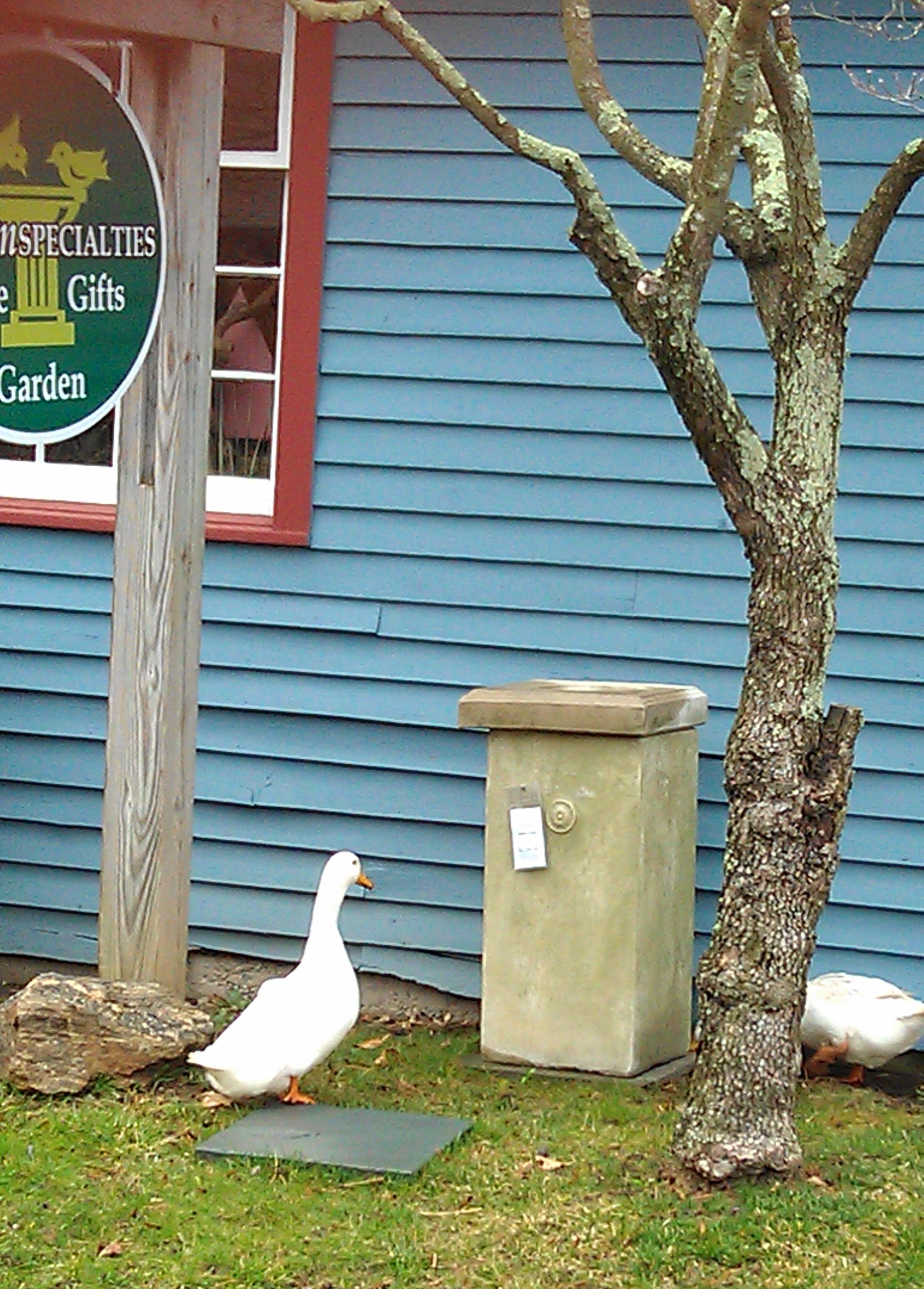 With no free food available at The Toy Soldier, the ducks waddled across our sidewalk to Garden Specialties. Duck in Charge turned right towards the parking lot to head home, while one of the white ducks seemed to be interested in a stone garden pedestal. Ignoring the others, Duck in Charge continued on his way, while Rogue Duck checked out the price tag. Perhaps he envisioned his duckiness perched on top of the pedestal, ruling the duck community. Whatever caught his eye in the first place, he quickly decided that the pedestal was either too expensive for his taste or wouldn’t fit in the ducks’ living space. The item was left behind for another shopper to buy.

Not long after the duck parade passed through town, a family with a young boy came into the store, umbrellas and all. Temporarily mesmerized, the boy stood in the entrance to The Toy Soldier until he could find his words. “Wow, oh, wow! I love this place. This is the best place in the whole wide world, maybe even the planet. Maybe even all the planets. Do you see this place, do you, Mom? Do you, Dad?”

“This is my kind of store, people. I could live here forever!”

When I asked him his age, he said, proudly. “Five years and four months and twenty days old. Guess when my birthday is.”

“Times up,” he said, leaning on the counter with a wider grin, if that were even possible.

“But . . .” I reached for the calculator, added, then subtracted, and surprised him (and myself) by guessing the right date. Phew!

“Dragons? What kind of dragons?” 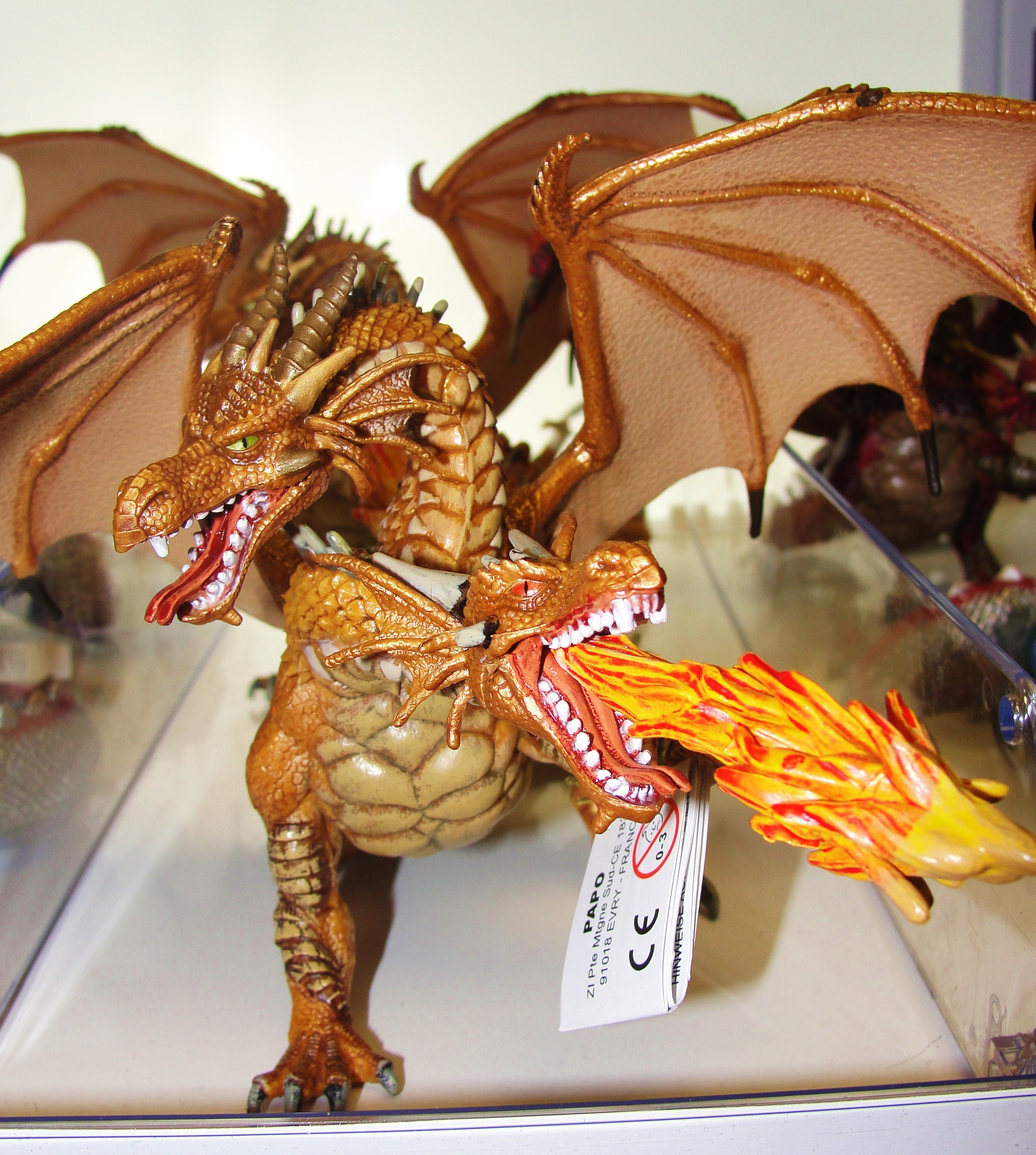 “Like that one!” He pointed at the two-headed dragon figurine breathing fire. “That is a huge, HUGE dragon. And it breathes very hot fire.”

“His breath is so hot, it’s like volcano breath, and I need to fight him. I have to fight all the dragons with fire breath before they destroy the planet. I need a sword. We have to hurry. They’re coming to get us.”

“I can help you,” I told him, and then whispered, “Follow me and I will show you where the magic swords are. Maybe you could protect me too.”

Up the  ramp, we started for the Magic Sword Department, until something grabbed his attention: the rack of pop-guns.

“Wait, this might be more magic than a sword.” Pop.Pop. Pop. Pop.

“Carlton! No guns,” said his mother.

Carlton’s dad slipped away from the room of collectible soldiers. “Carlton, no guns. You heard what your mother said.”

“Come on, Carlton, the swords are much better than pop-guns,” I said.

“I am really, really sure.”

His mother winked at me. His father mouthed  “Thank you.”

We continued to the back of the store. To access our upper level, you must first pass the Pink Room, which is where Carlton’s feet stopped moving.  “This is girl stuff. I’m not going through here. I don’t like pink.”

“Are you a true knight, Carlton?”

“A true knight is brave enough to travel  through the Kingdom of  All Things Pink. They have to, if they want to reach the Land of The Magic Swords.”

“No, I’m just a kid, but you can call me  Super Dragon Destroyer.”

“Wow, can I get your autograph?”

“I can’t spell Super Dragon Destroyer, how about a  high-five?”

We high-five, after which I reached into a wooden barrel to grab a sword. I handed him the black and silver toy weapon. “I only show these to the ones who can truly fight the dragons,” I whispered.

I took a sword for myself, and then together, we headed back down the wooden ramp, swords drawn. “Charge!” we said and pointed our rubber weapons at the display of dragons.

“I got him. I got the fire one!” Carlton ran to his parents. “The planet is safe.”

“What would we do without you, Carlton,” his father said.

“Can you buy me the sword now?”

Sale completed, I watched Carlton run down our walkway. With his magic sword held in front of his body, he swiveled in all directions, ready for any dragons that might appear from behind the bushes.

The dragons defeated, I prepared for my next battle; the ducks were at it again. A group ran past me, flapping their wings. Three males chased a lone female. Still holding a sword, I waited for the cue, and when the female appeared to be struggling with the two more powerful males, each biting her neck, I slipped into my role of Super Duck Controller, and heeded the call for help.

Despite the rain, it was another successful day for the Super Heroes of Olde Mistick Village.

Next Friday’s post: Bear Gets a Bath. (another adventure at the toy store.)